Flamingos dominate in shots, but concede twice on the break in 2-0 loss to Revolution II 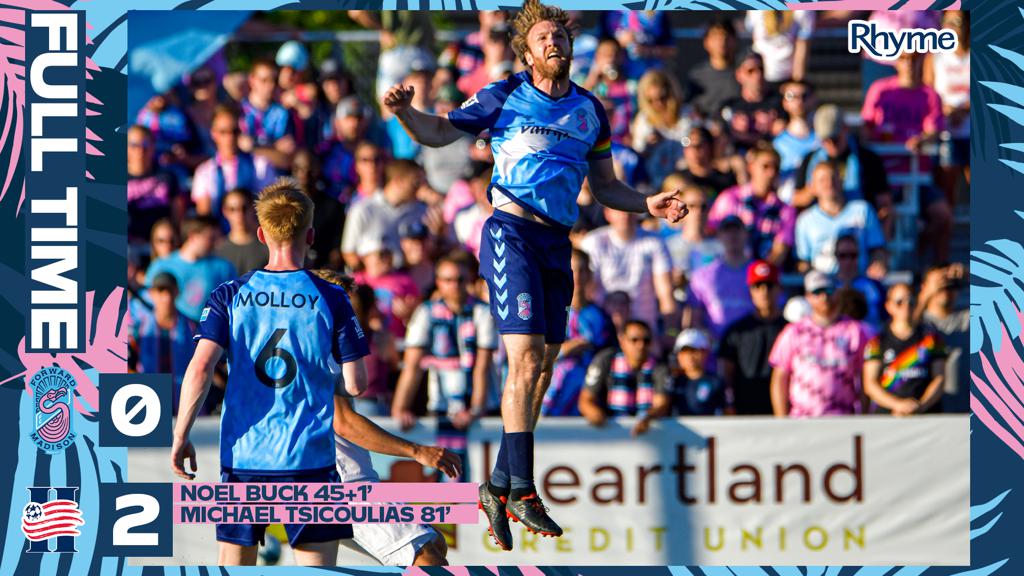 Forward Madison just couldn’t find the back of the net Saturday night, striking the post multiple times in a 2-0 defeat to New England Revolution II at Breese Stevens Field. The visitors struck twice against the run of play, dooming the Flamingos’ to their second home loss of the season.

Madison mustered 20 shots to New England’s 10, ringing the woodwork four times during the course of the match, but couldn’t find the finishing touch. For Jake Keegan, who came close time and again during the match, the Flamingos need to dig deep to turn things around.

“When you go through adversity, you find out who you are,” Keegan said. “When things are great in the first four games of the year, everybody’s buzzing and it’s easier to get up for the game and respond well. When things aren’t going as well, as they are here, we still shouldn't switch off.”

The first period of play went mostly the way of Forward Madison, thanks to near-misses from Carlos Gomez - whose shot went just wide in the 11th minute - and Noah Fuson, who struck the crossbar in the 28th minute.

But it was New England II which broke the deadlock through Noel Buck in the first minute of first half stoppage time. The Revs’ Justin Rennicks drove down the left wing before cutting the ball back for Buck, who powered in an effort from close range.

According to head coach Carl Craig, his team got caught on the break at the wrong moment.

“The only thing we were lacking was putting it in the back of the net,” Craig said. ‘I think that was our best half of football but for the finishing.”

Forward Madison came close again in the second half on multiple occasions, pressing hard against a Revolution II team that had dropped its last two matches. The Flamingos had perhaps their best chance in the 51st minute, when Jake Keegan hit the far post before Derek Gebhard rattled the crossbar on his follow-up effort.

Keegan hit the post again in the 64th minute, the fourth time in the match the Flamingos were denied by the woodwork.

In the end, though, it was the visitors who scored the game’s second goal thanks to MIchael Tsicoulias, who struck on the counter in the 81st minute. The Flamingos were unable to contest the Revs as they pushed the ball down the field, and Ronaldo Lomeli found himself on the back foot as Tsicoulias dribbled inside and smashed a shot to the far post from the left side of the box.

Even in defeat, however, the Flamingos can take some positives from Saturday’s match. For goalkeeper Phil Breno, who made three saves, better results are on the horizon.

“I wholeheartedly believe it’s coming,” Breno said. “We are, as cliche as this might sound, in ‘the calm before the storm.’ I feel like we are about to tap into something that we haven’t before and unfortunately it just didn’t come through tonight. I truly believe that there’s a side of us we have yet to show people.”

The loss drops Forward Madison to seventh place on 12 points, but keeps the team in contention for USL League One’s six playoff spots. The Flamingos head east next Wednesday for a road game against the Greenville Triumph on June 23 before returning home for a midweek rematch against New England Revolution II on June 30.