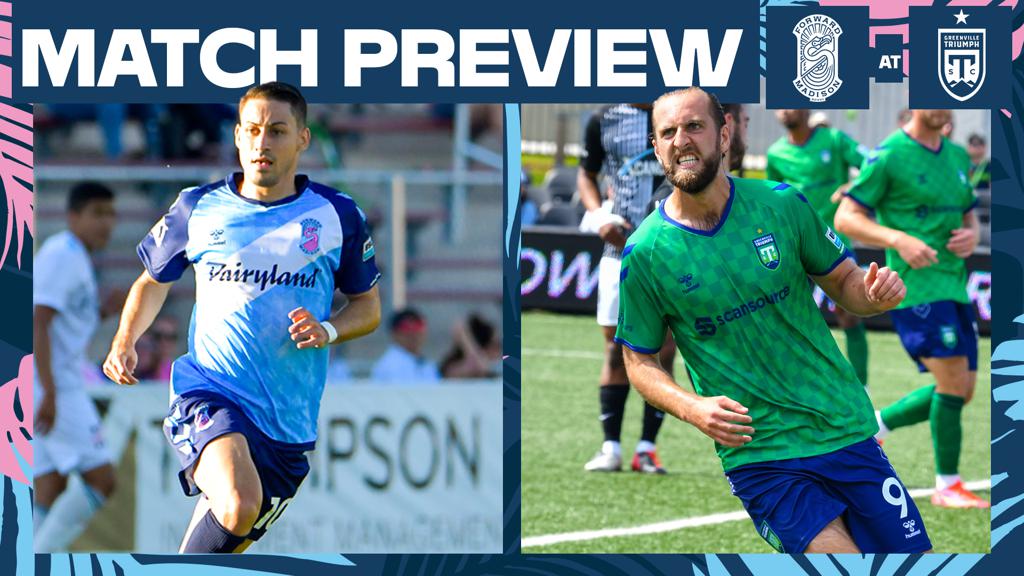 Forward Madison heads to South Carolina to face off against defending USL League One champions Greenville Triumph SC on Wednesday. Kickoff is set for 6 p.m. CT.

Fans in Madison are encouraged to come to Breese Stevens Field starting at 5:30 for a watch party, as well as the reveal of the team’s 2021 alternate jersey. Alongside the watch party, the Flamingos will wear their new kit during the match in Greenville.

Last Saturday, the Flamingos fell short in an attempt to pick up their first win in four games, losing 2-0 to New England Revolution II at Breese Stevens Field. Forward Madison now holds a 3-2-3 record and dropped to seventh place in the USL League One standings with 12 points.

The loss ultimately came down to a series of minor errors according to head coach Carl Craig, but he was also quick to note that despite the loss, his team played some of their best soccer of the season.

“The frustration is given the amount of chances we had on Saturday and not finishing those opportunities,” Craig said. “But those first 50-60 minutes were by far the best football we played all year.”

One of the silver linings of Saturday’s match was midfielder Christian Enriquez, who officially signed with Forward Madison a day before the game and made a strong first impression during his debut start.

“I thought he fit in like a hand in a glove,” Craig said. “For having played about 55-60 minutes, he was outstanding, particularly given the fact that he’s only been with us for about a week. We hired him because of his style and his style fit with us, so we’re really pleased with him.”

Looking ahead to Wednesday, the Flamingos’ match with the Triumph could be the toughest competition Craig’s team has had to face yet. Greenville, defending USL League One champions and runner-up in 2019, is currently 3rd in the league table with 16 points.

Additionally, Forward Madison has never won - or even scored a goal, for that matter - in a game against the Triumph, holding an 0-2-3 all-time record. If there’s any time for that to change, though, it may be now. Last week, Greenville suffered its second loss of the season with a 3-1 defeat against South Georgia Tormenta FC, and the Triumph could be missing several key players through injury, including former Flamingo Don Smart, who is listed as questionable.

Midfielder Carlos Gomez, who played for Greenville from 2019-20, said he is confident that the team is ready for the game on Wednesday.

For Gomez and co-captain Jake Keegan, who also spent the last two years with Greenville, there’s extra motivation to help the Flamingos come away with their first victory over the Triumph.

“We know the weaknesses they [Greenville] have and also their strengths, so we are doing our best to let our current teammates know so we can make sure we are ready to fight against them,” Gomez said.

Following Wednesday’s game the Flamingos are back at Breese on June 30 for a much-anticipated rematch against New England Revolution II.