Flamingos score two early through Molloy, battle to 2-2 result away to Triumph 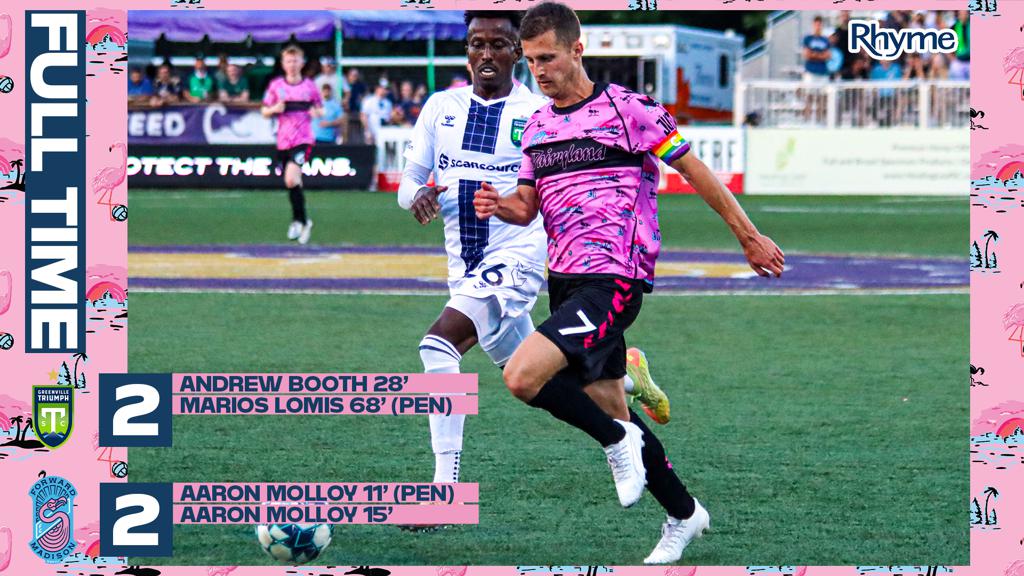 Forward Madison held on for a point Wednesday night, fighting for a 2-2 draw against defending USL League One champion Greenville Triumph on the road. Midfielder Aaron Molloy scored two early goals, but the Flamingos ultimately secured just a point after a Greenville comeback.

The Flamingos jumped out to an early 2-0 lead thanks to Molloy, who scored Forward Madison’s first-ever goal against Greenville off of a penalty kick in the 11th minute. The foul that allowed Molloy’s spot kick came after Greenville’s Abdi Mohamed kicked through Jiro Barriga Toyama, leaving the Irishman to slot home with a powerful shot down into the middle of the goal.

One goal wasn’t enough for Molloy, though, who struck again just four minutes later. Striker Jake Keegan laid the ball off to Molloy at the top of the 18-yard-box, and the Madison midfielder did the rest, thumping home a powerful first-time effort from distance.

The 2-0 lead was short lived, though, as Greenville's Andrew Booth scored a goal in the 29th minute from a right footed shot towards the center goal after a receiving a cross from Allen Gavilenes.

The second half will likely be more notable for Forward Madison’s exploits off the field than on it. The Flamingos came out wearing the second side of the team’s new reversible alternate kit, featuring a pink beach pattern - rather than the black, flamingo-speckled side from the first half.

In the end, it was Marios Lomis who tied the game for Greenville by scoring off of a penalty kick in the 68th minute after a controversial handball was called on Noah Fuson.

Greenville made one final push to win the game in the 96th minute, but Phil Breno was able to put a stop to it when he saved a last-ditch shot by Brandon Fricke.

Thanks to Wednesday night’s game, Forward Madison jumps up to sixth place in USL League One standings. The Flamingos will have a week to rest up before a rematch of last Saturday’s game against New England Revolution II on Wednesday, June 30 at Breese Stevens Field.