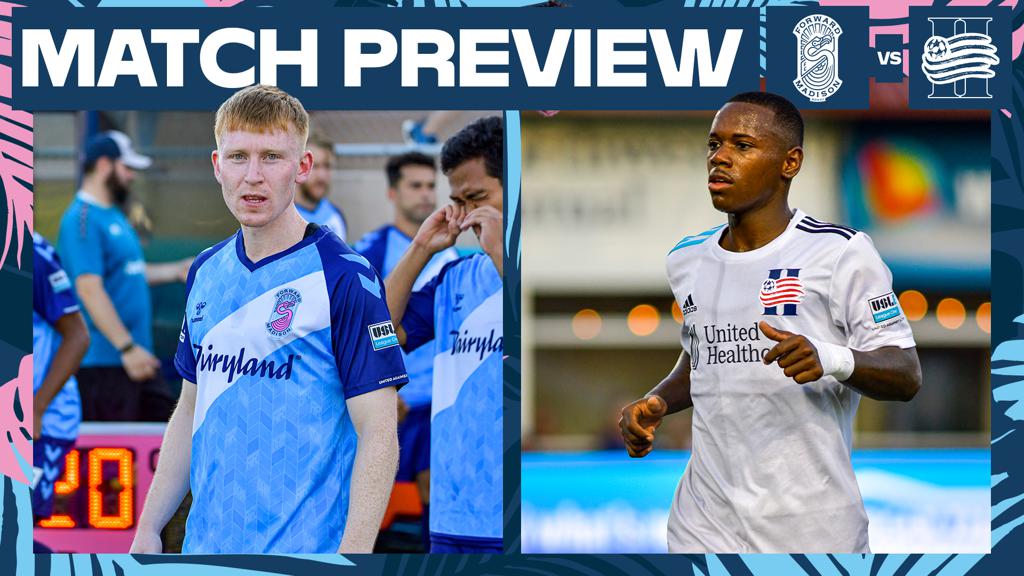 Forward Madison FC is looking for revenge Wednesday night when it welcomes New England Revolution II to Breese Stevens Field for the second time in just 11 days. Gates open at 6 p.m. and kickoff is set for 7 p.m. CT.

FMFC will be looking to turn the tables on the Revolution, who walked out 2-0 winners largely against the run of play on June 19. According to midfielder Aaron Molloy, who played the full 90 minutes in that game, the ‘Mingos are ready to own up to their mistakes.

“This week we have a fire in our belly,” Molloy said. “Everyone’s up for this game. We’re really excited to put things right.”

Molloy played a significant role in earning Forward Madison a point at Greenville Triumph SC last week, scoring both goals for the Flamingos in a 2-2 road draw. The Irishman’s rocket from distance in the 15th minute earned a nomination for USL League One Goal of the Week.

“Coach has been on us about getting up the field with the ball,” Molloy said. “A lot of us went up for the counter-attack and Jake [Keegan] found me on the top of the box. I was happy to hit it clean and get it on target.”

The result means Forward Madison currently sit seventh in the USL League One standings, tied on points with the visiting Revolution II. Midfielder Justin Sukow is doubtful for Wednesday’s game, but midfielder Michael Vang and goalkeeper Aidan Hogan have returned from injury, while defender Josiah Trimmingham - who only recently arrived in the country - has officially cleared League One’s Covid-19 testing protocols.

For head coach Carl Craig, the Flamingos’ strong road performance - and in particular its interplay in the first half - is indicative of the team’s progress despite a recent dip in form.

“I think we’re in a really positive position,” Craig said. “We haven’t always had the results we desire, but we take the game to the opponent and we’re assertive. I think that’s what we should be doing and I think we’ve got the tools to be doing it. Now we just have to put that bloody thing in the net.”

On the other side, New England Revolution II comes into the game riding a fine spell of form. After beating the Flamingos on June 19, the Revolution powered past North Texas SC 3-0 on Saturday and have now won three of their last five matches.

Midfielder Noel Buck, who scored New England’s winner in Madison, may be the player to watch for the visitors. Buck leads the Revolution with three goals scored in nine appearances, while midfielder Jake Rozhansky paces the team in assists with three decisive passes.

According to Craig, the Flamingos would do well to feed off the energy from Breese Stevens Field in order to topple the Revolution on Wednesday.

“I’ll take a win, but I want us to have a certain style and caché where we’re not only winning, but we’re winning in a way that entertains the fans,” Craig said. “The vibrant atmosphere here encourages the style of football that we want to play. I think that’s when you get that flow state between the players on the field and the crowd.”

Following Saturday’s match, Forward Madison will take a week off before traveling south for a road game against North Texas SC on July 10. The Flamingos won’t return to Breese Stevens Field until July 20, when they host Mexican team Atlético Morelia in an exhibition game.