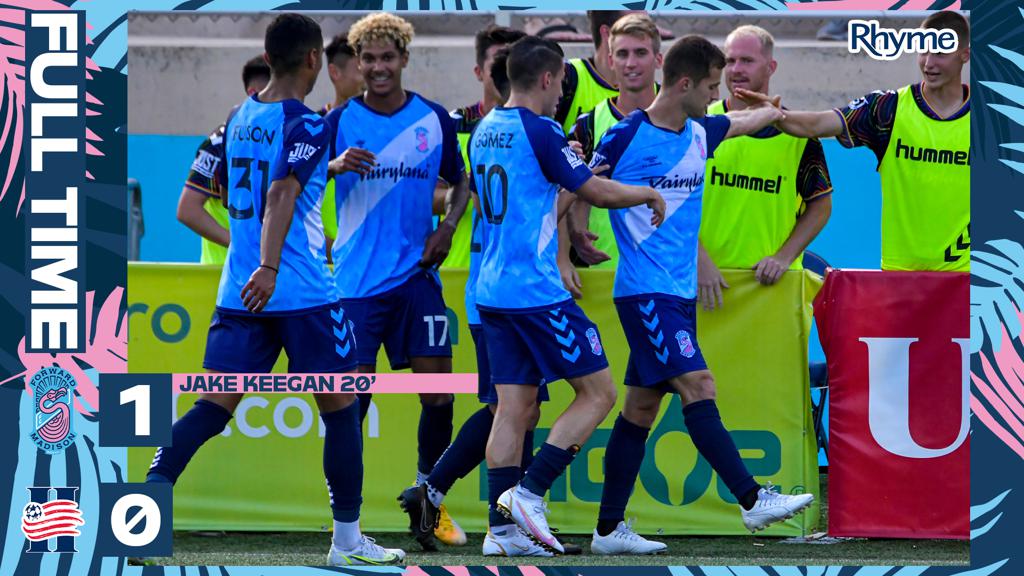 Forward Madison found victory for the first time in six tries on Wednesday, earning a 1-0 win over New England Revolution II at Breese Stevens Field. Forward Jake Keegan secured the three points with a goal on a breakaway in the 20th minute, his team-leading fifth strike of the season.

The win earned the Flamingos a measure of revenge over the Revolution, who had previously beaten FMFC at home on June 19.

Head coach Carl Craig lauded his team’s mental fortitude to preserve the lead as the game wore on.

“I think it’s a massive shift to score the goal and then to be under pressure for so long, to show such character is outstanding,” Craig said. “That’s a shift in our mentality, because last week down in Greenville we we’re in a better position, in better control and we didn’t finish it off. Today shows great character.”

Despite a slow start for the hosts, it was Forward Madison which opened the scoring in the 20th minute. A probing ball from Christian Diaz made its way to Jake Keegan, and the Flamingos’ top scorer quickly found himself one on one with New England’s goalkeeper before smashing his fifth goal of the season into the back of the net.

According to Keegan, though, it was the Flamingos’ ability to persevere after his goal that revealed the team’s true character.

New England II came close from distance in the 36th minute on a shot from Damian Rivera, though their best chance of the first half was snuffed out by Phil Breno during a late rush towards Forward Madison’s goal in the final moments before halftime.

After the break, Forward Madison held a much better grip on the game, but set piece routines led by Aaron Molloy ultimately didn’t breach the defense. Molloy also scuffed a header wide in the 59th minute, while New England’s Noel Buck hit the crossbar in the 86th minute.

Goalkeeper Phil Breno, who kept his third clean sheet of the season, noted the importance of the fans and emphasized that more is to come from the Flamingos.

“I still believe that tonight was great, but we still have so much more horsepower behind us and it’s coming,” Breno said. “This is the best atmosphere you could play in lower league soccer, maybe in higher league soccer in the U.S. This is just wonderful across the board.”

Thanks to the win, Forward Madison climbed to fifth place on 16 points in USL League One, ahead of Toronto FC II on goal differential with two games in hand.

The Flamingos will now head out on a two-game road trip, starting with a stop against North Texas SC on July 10 before facing Union Omaha on July 16. The next home game FMFC is a friendly against Atletico Morelia of Mexico on July 20.