Flamingos travel to Arlington for road match against familiar foes 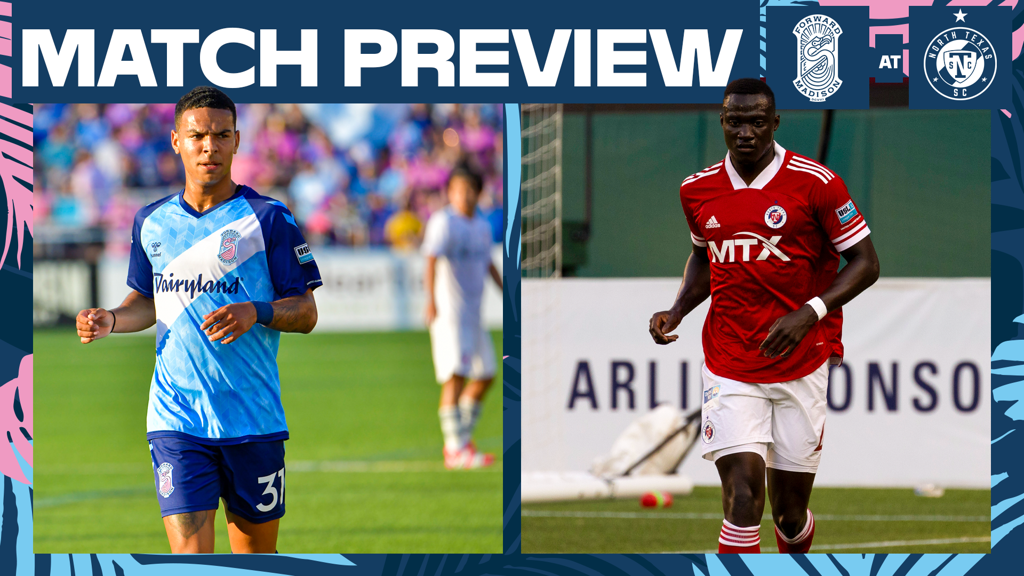 Forward Madison is seeking to build a winning streak this Saturday, as the Flamingos travel to Arlington, TX to take on 2019 USL League One champions North Texas SC. Kickoff is set for 8 p.m. CT.

Last week, Forward Madison FC broke its six-game winless run thanks to a 1-0 victory against New England Revolution II at Breese Stevens Field. Forward Jake Keegan scored the game-winning goal on a breakaway in the 20th minute to put the Flamingos, who now sit sixth with 16 points in USL League One standings, back in playoff position.

Head Coach Carl Craig noted that the win against New England was important, but highlighted some key moments to improve upon going into this Saturday’s game.

One of Craig’s recent additions to the Forward Madison lineup has come in the form of winger Noah Fuson, who has now started in the team’s last three games.

“It feels really good to be in the starting lineup, to have the trust of the coaches and to be in a position to help the team win games,” Fuson said. “[We’ll] continue to move towards our goal of winning a championship this year.”

Although the Flamingos are back in the win column, Craig will have to rely on a thinner squad than usual to bring three points back to Madison this weekend. Defender Josiah Trimmingham and midfielder Michael Vang are both sidelined with injuries, while midfielders Carlos Gomez Justin Sukow are both listed as questionable.

Looking ahead to Saturday, Forward Madison has only won two of six regular season matches against North Texas SC and has yet to earn a result on the road, notably falling 2-0 in the 2019 USL League One playoffs. Despites the history between the two teams, though, North Texas’s current league position puts Forward Madison in an advantageous spot to claim another three points.

North Texas currently sits in 11th place with 11 points, stranded at second-to-last in the USL League One standings. The team - which is an affiliate for FC Dallas of Major League Soccer - is currently on a two-game losing streak after dropping its previous match 3-2 to the Richmond Kickers last Saturday.

North Texas forward Thibaut Jacquel, who leads his team in goals scored (three) and shots taken (14), could threaten FMFC’s defense. Additionally, midfielder Bernard Kamungo and defender Derek Waldeck could impact the hosts’ ability to finish in the attacking third, since they lead North Texas in chances created with 10.

Despite the danger North Texas can pose, Fuson noted that the Flamingos feel confident in their ability to pick up another three points this weekend as long as they follow their gameplan.

“We’re looking forward to coming home with three points and getting a win,” Fuson said. “The coaches have some really good ideas that we’re implementing in training every day and once they come out on the pitch, I think we're going to be dangerous.”

Following Saturday’s game, Forward Madison will have a full week to rest up prior to heading to Omaha, Nebraska for its third regular season face-off against Union Omaha on July 17.