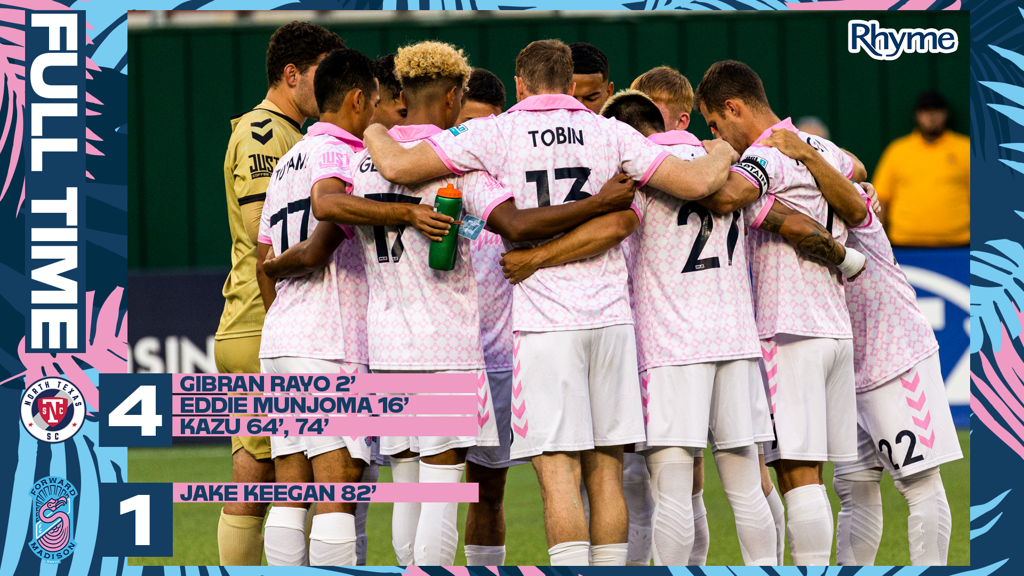 Forward Madison FC fell to a heavy road defeat Saturday, dropping a 4-1 result to North Texas SC. Flamingos’ top scorer Jake Keegan picked up a late goal, but it was the only consolation in what was FMFC’s most lopsided result of the season thus far.

With the loss, Forward Madison falls out of the top six in the standings, putting the team out of USL League One’s playoff places. The Flamingos currently sit at 8th in the league with 16 points.

North Texas came out firing, with forward Freddy Vargas slipping past Madison defender Gustavo Fernandes and passing to teammate Gibran Rayo, who scored on a point-blank chance past a diving Phil Breno to go up 1-0 in the 2nd minute.

Forward Madison had its chances to score later in the first half, none better than when midfielder Carlos Gomez crossed a ball to Gustavo Fernandes, who headed it straight into the feet of leaping North Texas goalkeeper Richard Sánchez.

North Texas would grow its lead midway through the second half as midfielder Kazu scored in the 64th minute to put the hosts up 3-0.

Kazu struck again later in the second half, capitalizing on an opportunity to score his second goal of the game, and putting North Texas up 4-0 in the 74th minute.

Forward Jake Keegan pulled one back for the Flamingos in the 82nd minute, scoring on a counter-attack in what was ultimately a consolation effort. Keegan, who leads the Flamingos with six tallies on the season, is now only one goal away from tying ex-North Texas forward Ronaldo Damus as USL League One’s all-time top scorer.

Following Saturday’s loss, Forward Madison will be back on the road on July 16 as the team visits Union Omaha. The Flamingos return home on July 20 for an international exhibition game with Club Atlético Morelia of Mexico.