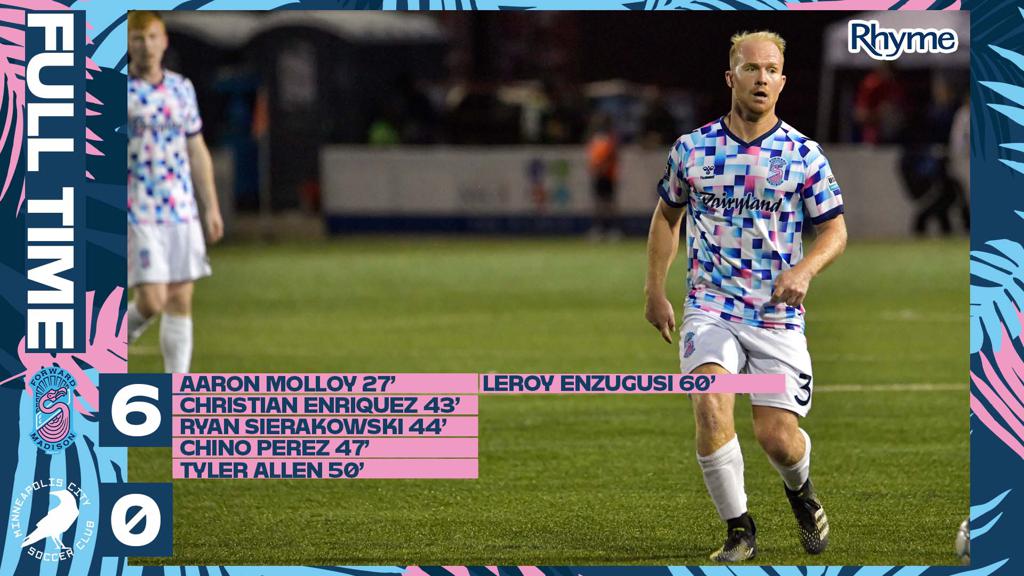 The Flamingos defeat the Crows in a friendly match

Forward Madison played host to Minneapolis City SC on Tuesday night at Breese Stevens Field. The Flamingos got off to a hot start putting pressure on the Crow’s net. Ryan Sierakowski had the best chance off the start in the 7’ minute, but missed it over the bar. Aaron Molloy had a strong strike at goal in the 11’ minute, but a nice save was made by Minneapolis City keeper Eh Ku Say. Aaron Molloy opened the scoring for the Flamingos in the 27’ with a beautiful strike that beat the Crows’ keeper. The Flamingos ended the first half with back to back goals from Christian Enriquez and Ryan Sierakowski to give FMFC a 3-0 lead going into the break.

The start of the second half got off to a flying start in the 57’ minute for Forward as Chino Perez stole a pass in the Crows half and took it all the way to the box to score and give the home team a 4-0 advantage. The Flamingos would tack on one more in the 50’ minute as Tyler Allen netted a near-post shot from the right side of the box. Trialist Leroy Enzugusi got on the scoresheet for the Flamingos in the 60’ minute giving FMFC a 6-0 commanding lead. The Flamingos controlled much of the possession in the second half, limiting Minneapolis City chances.

Up next at Breese Stevens, Forward Madison welcome current 9th spot team Richmond Kickers this Saturday, September 11. The Flamingos sit in 11th place currently, but 3 points on Saturday would vault them up the table into a potential playoff position.