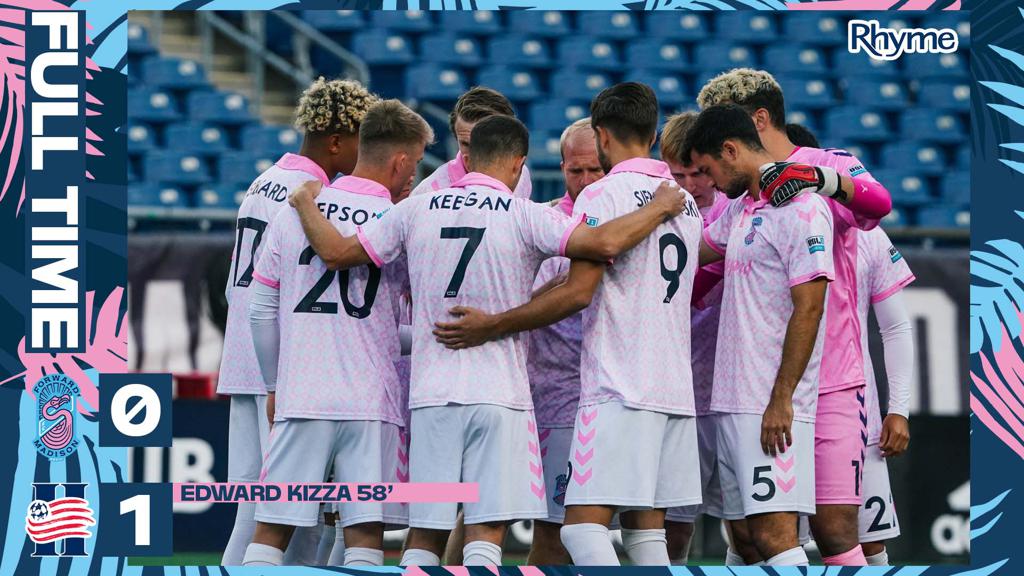 Forward Madison dropped their sixth game of the year as they fell 1-0 to New England Revolution II. Forward failed to capitalize on their chances and went scoreless for just the fourth time all season.

New England dominated possession in the first half, holding onto the ball for over 60% of the time. The Flamingos battled through however, limiting New England to only 3 on-target shots in the first half as they kept the Revolution from converting on any of their chances. No play better encapsulated Forward’s defensive effort than Conor Tobin’s spectacular block in the 12th minute as he chased down New England’s Connor Pressly before he could shoot it from point blank range.

On the other end of the ball, Forward failed to score in the first half, but they had several decent opportunities to do so. Derek Gebhard rifled one directly into the goalkeeper’s chest, Audi Jepson missed on a spectacular effort to sink one with a bicycle kick, and both Ryan Sierakowski and Aaron Molloy missed shots from long range,

The ‘Mingos almost had a golden opportunity at the end of the first half as New England Goalkeeper Joe Rice lost the ball after a shot from Christian Enriquez bounced away in front of the goal, but Forward could not convert, and both teams headed to the locker room at halftime with no score on the board.

Both teams came out of halftime re-energized and re-focused, leading to a much more tightly contested second half.

New England broke the scoreless tie in the 58th minute as Edward Kizza knocked in a ball off the deflection from Phil Breno who had saved a shot from Justin Rennicks.

One would be all New England needed, as even with several close opportunities in the waning minutes, including several great chances for Josiah Trimmingham, the Flamingos could not find the back of the net. As the final seconds ticked off the clock, New England walked off victorious with a 1-0 final score.

With this loss, Forward Madison does not change position in the USL League One table. With 29 points, they remain in 9th place, three spots back of the final playoff position.

The Flamingos face a quick turnaround as they fly down to Virginia this Friday to take on Richmond Kickers at 5:30 PM Central.