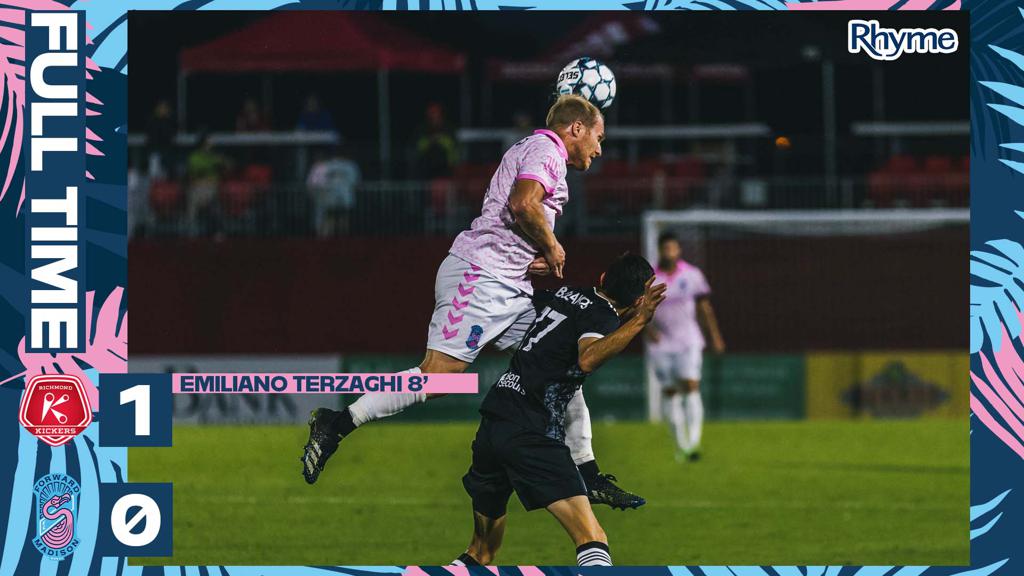 The Flamingos controlled most of possession, but are unable to best Richmond in Virginia

Forward Madison traveled to Richmond, Virginia for a midweek date against the seventh-place Richmond Kickers. The match was played at City Stadium and started at 5:36pm CT. The Flamingos entered the match sitting in tenth position with 29 points on the season.

Richmond’s top scorer Emiliano Terzaghi claimed the first goal of the match in the eighth minute of the first half. Forward Madison held just around 60% possession for the majority of the first half, but only managed to take three shots as Richmond’s defense held strong.

The Flamingos got an opportunity score with a free kick when Derek Gebhard was fouled just outside the box in the 26’ minute but they just could not seem to fully seize the opportunity. Phil Breno made a crucial touch, blocking a well-placed cross from Richmond in the 36’ minute. Both teams played a fairly clean first half, with seven free kicks each but no cards given.

Moving into the second half, Forward Madison continued to hold 60% possession. The Flamingos had an early opportunity for a goal in the 53’ minute as Gebhard took a shot that was not able to find the goal. Phil Breno arguably had the save of the game in the 63’ minute as he blocked a great shot from Johathan Bolanos. Both teams held their own in a scoreless second half, but were ultimately unable to break lines for a goal.

Forward Madison FC continues their playoff hunt next week when they have a rematch against New England Revolution II at 4PM Central. New England is currently sitting in 4th in the USL League One table and beat FMFC 1-0 this past week.