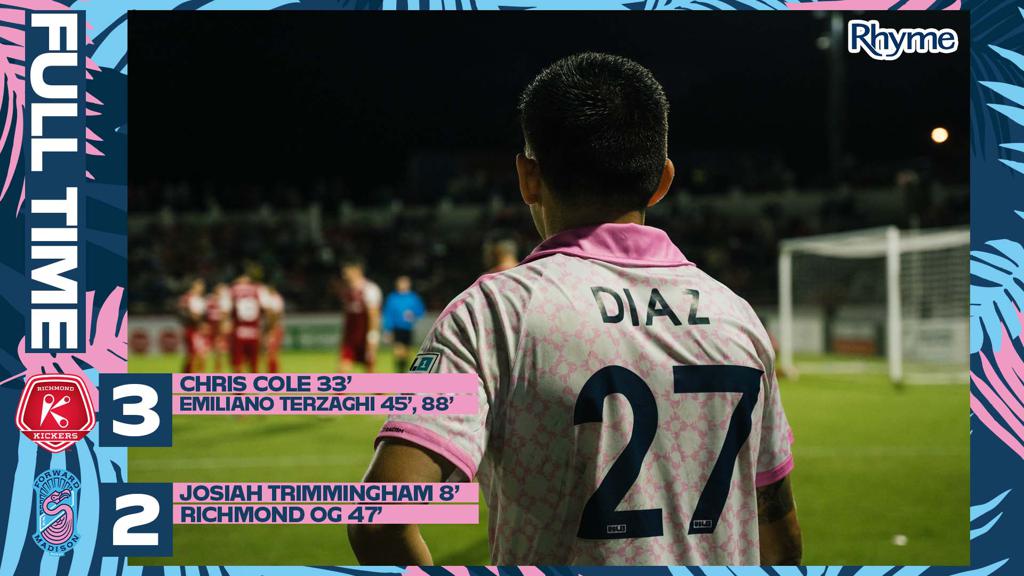 Forward snap their scoreless streak, but ultimately fell to the Kickers

Forward Madison returned to Richmond on Saturday night for their final match against Richmond Kickers. The match was played at City Stadium in Richmond, VA at began at 5:40pm CT. The Flamingos entered the match with 29 points, placing them in 10th place in the USL League One standings.

The Flamingos got the action going right away when defender Eric Leonard served up a perfect through ball to Josiah Trimmingham, who beat his defender off the turn and fired it into the roof of the net to give the Flamingos and early 1-0 lead in the 8’ minute. After an early go, the action flowed from end to end with not many chances being created for either side. That all changed in the 33’ minute when a corner kick served to the back post was headed into the back of the net by Chris Cole of Richmond. Richmond added to the damage in the 45’ minute when an unlucky bounce ended up past Phil Breno and into the back of the net courtesy of Richmond striker Emiliano Terzaghi. FMFC went into the halftime break down 2-1.

Just like in the first half, the Flamingos got the second half started with a bang. Derek Gebhard served a dangerous low driven pass into the box and dribbled it into the goal off of a Richmond defender in the 47’ minute to equalize the score at 2-2. After equalizing, Forward put the pressure on the Richmond back line, holding much of the possession in the Richmond final third. After a frantic final 10 minutes with chances for both squads, the Kickers knocked in a third goal courtesy of Emiliano Terzaghi to go ahead and stay ahead to end the match 3-2.

Forward Madison FC concludes their longest road trip of the season in Omaha on Wednesday, October 20 at 7pm CT. Omaha is the current league-leaders, this match is a make-up match for a rainout earlier in the season.