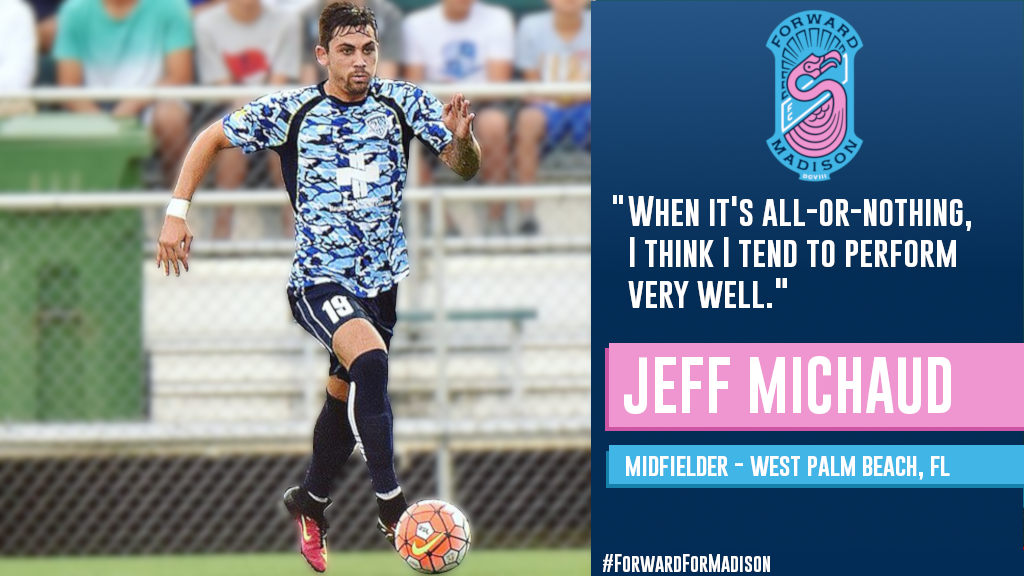 “I love playing in the Open Cup,” Michaud said. “[The] opportunities for me are amazing and that’s the beauty of that tournament. Being the underdog, being able to go out there and leave it all out on the field because it’s win-or-go-home.”

The U.S. Open Cup is America’s oldest and perhaps most prestigious soccer tournament. Founded in 1914, the Open Cup features every professional team in the United States, regardless of league, as well as the country’s best semi-professional and amateur clubs. When Forward Madison enters the Open Cup’s 106th edition in 2019, it will be able to turn to Michaud, who has scored six goals in the tournament, as an option.

Michaud scored twice for the Wilmington Hammerhead in 2016, three times for the South Florida Surf in 2017, and once for Miami FC in 2018. The first of those goals, a long-range strike against his future club, Miami FC, remains the most dear to him.

“For me it was a little bit of a homecoming,” Michaud said. I’m a south Florida kid, I had been up in Wilmington, which was my first time living out of the state.

“My family was there, I had a lot of friends there.”

In the second minute of the game, Miami turned the ball over in its own half. Wilmington forward Matthew Barnes-Homer put his head up and looked for Michaud:

“The ball got swung to me, I was playing on the left side of the field,” Michaud recalled. “I took a touch, saw that I had an opportunity to have a strike. [I] took a touch and just laced it and beat the ‘keeper, he didn’t really stand a chance.”

Wilmington would go on to win the game 2-1, and for Michaud, it was the start of his prolific Open Cup goalscoring record.

The next year, playing for the South Florida Surf in the USL Premier Development League, Michaud scored three times in two games, including a scintillating half-volley against Red Force FC.

In 2018, Michaud, linking up with current Madison head coach Daryl Shore at Miami FC, found himself on the scoresheet again during an Open Cup play-in game. This time, Michaud dribbled the ball around the defense before curling it into the top corner.

Jeff Michaud joins Forward Madison FC for its inaugural USL League One season in 2019. Follow Michaud on Instagram at @jeffmichaud_. Michaud’s signing will be confirmed pending league and federation approval.