Forward Madison's new signing has played at the very top 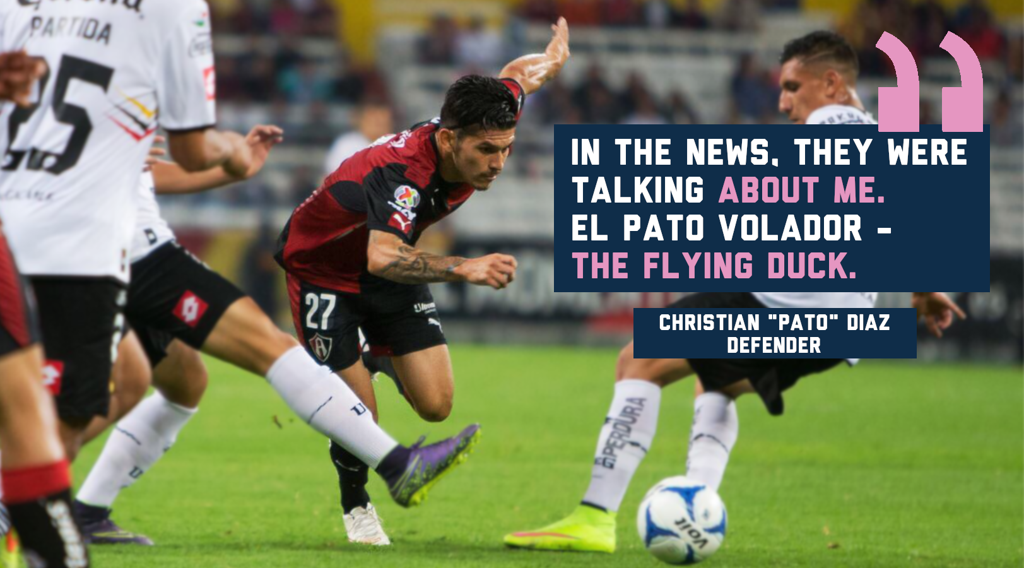 Christian Diaz has known two things about himself since before he can remember. The first is his nickname, Pato, which means "duck" in Spanish.

“My whole family, we have nicknames and it’s all animals: Pato, Pollo, Borrego, Iguana,” Diaz said. “My nickname started because of my mom. I’m not sure, but they say that when I was a baby I used to cry like a duck.”

The second thing “Pato” Diaz has always known is that he loves soccer. Born in Guadalajara, he grew up playing the game on the streets, and he couldn’t get enough of it.

“That’s where [the] dream starts for us, for people over there,” he said. “As a young player, that’s our only dream, being a soccer player and helping our families. There were rocks, sometimes people got cut. It was crazy, but it was really fun.”

Since those early days in the alleyways of Mexico’s second-largest city, Diaz’s love of soccer has guided the direction of his life. Even when he’s changed course, the game has always been there for him. At nine years old, Diaz moved out of Guadalajara, and went by himself to southern California. Although he had some members of his extended family to stay with, it was nonetheless a drastic change for someone of his age. In the absence of familiarity, though, Diaz hung onto soccer.

He played in local leagues at first, then later turned out for his high school team. During Diaz's junior year, the father of one of his teammates, who Pato had become close with, told him about a scout he knew in Mexico. At 15 years old, Diaz decided to take a chance.

“The scouting was two days, and I don’t even remember how many players were there,” Diaz said. “I was the lucky one. I was picked.”

As chance would have it, Diaz had been found by a team in his home city of Guadalajara - Fútbol Club Atlas, one of the most historic clubs in Mexico, playing in the top division of Mexican soccer. After passing another trial period, the coaches told Diaz they wanted him to stick around, and so he became part of the team.

From there, everything came quickly. At the time, Diaz played as a winger, and his attacking skill was evident. He had the pace to get up the field, the ball skills to evade defenders, and the crossing ability to set up his teammates for the finish. He began with Atlas’ reserve teams in Mexico’s lower leagues, but after about a year and a half, in September of 2009, he got his chance with the main squad.

While in training with the reserve team one day, Diaz’s coach came up to him for a chat.

“Our coach, he was like, ‘You know what, they want to see you over there on the first team level,’” Diaz said. “'Coach wants to see you. He’s hearing a lot of good things.'”

Atlas’ manager at the time was the legendary Ricardo La Volpe, who has been coaching since the early 1980s. Before coming to Atlas in 2009, he had managed eight different Mexican teams (including a previous stint with Atlas), the Mexican national team, and Boca Juniors in Argentina.

“I went up to La Volpe,” Diaz remembered. “He was like, ‘This is what I want you to do: I want to see how good you are with the ball. They say you’re pretty fast, that you can give me some crosses, I want to see that. So all you have to do is, we’re going to pass you a ball and you’re going to try to one-on-one our defenders.

Diaz did what he was good at. He sped up the flank, he dribbled past Atlas' first-team defenders, and he whipped the ball into dangerous areas. After practice, though, he still had no idea if La Volpe had seen enough.

Afterwards, there was some buzz in the locker room. But the true realization came when Diaz got home.

"The first thing that I saw in the news, they were talking about me," Diaz said. "They started talking about me: the new kid, el pato volador (the flying duck) because I was fast."

On Sep. 5, the 17-year-old who had been playing for his California high school team not even two years previously came on as a substitute at Atlas' 55,000-seat Estadio Jalisco. The game, played against San Luis, would eventually end 0-0, but it was a moment Pato hasn't forgotten since.

As Diaz’s career continued, he faced ups and downs. Despite debuting for Atlas at 17, he never quite established himself as a regular starter. La Volpe, who had put his faith in Diaz, left in 2010 to coach the Costa Rica national team. He ended up moving to Leones Negros, another team in Guadalajara, where he played in both the Mexican second and first division. In 2016, he signed for Tlaxcala, where he helped the team win promotion from the third division.

After that season ended in 2017, though, Diaz’s journey ground to a halt. His contract was up, and he had nowhere to play. For a while, it looked as if he didn’t have any options. He wanted to go back to the United States, but teams already had their rosters set. Finally, he got his break by turning back to his California roots. Diaz got some help from an old friend: Miguel Ibarra, the midfielder for Minnesota United (in Major League Soccer) and the U.S. men’s national team.

“I’ve known Miguel since I was a little kid (in California),” Diaz said. “He’s a year older than me, so they used to compare us a lot. We always get together every time we get a chance.”

In a lucky coincidence, Ibarra had a connection that he thought could help Diaz find a new team. Ibarra was friends with Neil Hlavaty, Forward Madison’s current assistant coach, going back to their days together in Minnesota, and he had heard about Hlavaty's new job. Ibarra asked if Hlavaty might be interested in having his friend on trial, and the response was positive.

When Diaz came to Madison, it was clear at once to the coaching staff that they’d found a player who would fit into the team’s inaugural roster. On Sunday, FMFC officially announced him as the 15th player signed to the team.

“All this is because of Miguel,” Diaz said. “I’m very thankful that I still have friends who will help me out.”

Finally, Diaz is back on a soccer field. And after going from Mexico to the U.S. and back to Mexico again, he's ready for his American return.

“I was really looking to play over here (in the U.S.),” Diaz said. “It feels good. I’m really happy that I’ve signed.”