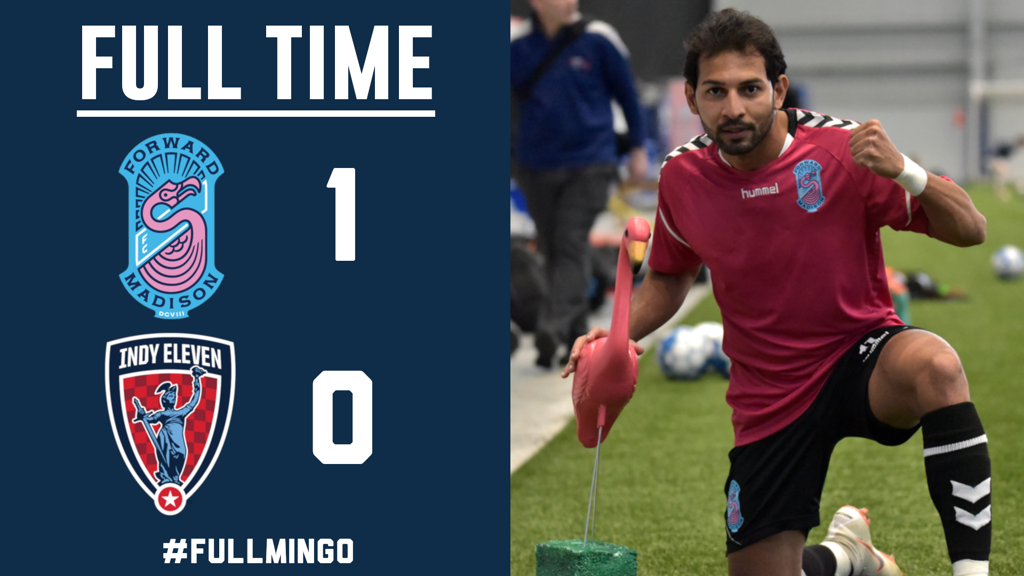 Forward Madison FC came out victorious in the team’s first-ever preseason match Friday afternoon, beating Indy Eleven of the USL Championship 1-0 in a closed-door contest in Rockford, IL. Winger Zaire Bartley scored the only goal of the game, placing a shot perfectly inside the far post during the 55th minute of action.

Head Coach Daryl Shore said he was happy with the result, but still saw plenty for his team to work on ahead of FMFC’s USL League One season opener on April 6 in Chattanooga. In particular, Shore said his players still have to continue to learn the team’s tactics and build up their fitness levels.

“We found out today that we’ve got a lot of work to do tactically,” Shore said. “[I’m] pleased with our result, but [there are] also a lot of things that need to be worked on and I think as a group we all know that.”

Madison started the game with a lineup that included 10 signed players and one trialist. Center forward J.C. Banks nearly put the Flamingos on the board in the 30th minute, but skied his effort over the bar. Goalkeeper Brian Sylvestre exited the game midway through the first half after picking up an ankle injury, but said later that it didn’t feel serious.

In the second half, FMFC changed its lineup entirely, putting on eight trialists and three signed players. Bartley, who at 20 years old is the youngest player on the squad, made an immediate impression, netting Forward’s first-ever preseason goal. Bartley said it felt nice to score, but the most important goal was gaining preparation for the regular season.

“It feels great to get on the scoresheet, especially against a good team," Bartley said. "We caught them off guard, we switched the ball perfectly. I took one touch out to set myself and then shot it far post and it went in."

Forward Madison will continue its preseason schedule on March 2 when the team travels to Missouri for friendly matches with St. Louis FC and St. Louis University.